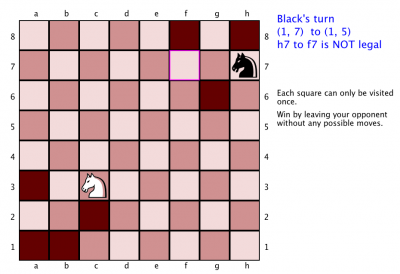 A game I learned about from Berkeley's Professor Dan Garcia's GamesCrafters Site Two knights on a chess board that move like chess, but as they leave a square, it is “burned” (uninhabitable for either player). Players alternate moving their knight trying to avoid being the loser who is left with no place to go. This is a real game that has strategy

Download and run joust_sfhs_2020.jar to see a working version of the game (On macs you have to go to Security and press “Open anyway” since it is not from an Apple identified developer).

This lab is set up so you can discover how to program conditional statements(if..then) and iterations (loops). The starter code has graphics and fancy things like handling input from the mouse. Your job will be to finish writing some vital boolean methods that will make the code work. Here is a zip file Joust.zip containing the starter source code for four classes.

Once you have it going, you can customize it: